Traveling down a country road, windows down and a cool breeze bringing thoughts of fall. A look up leads to confusion-the leaves are still green.  All is not lost, color abounds in the ditches and I pull over for a glimpse of nature’s other fall color. 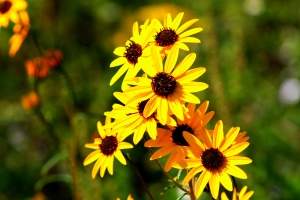 Black-eyed Susan with happy yellow faces catches the eye first. Swaying gently in the breeze, they bring back memories of childhood, when we would grab a fistful with our chubby little hands and gleefully present them to mom. The cheerful color never matched the brightness of her smile. 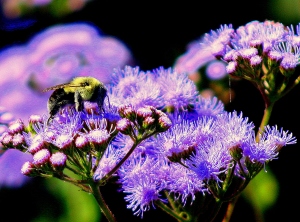 The eye slowly moves to the perfect complement to the bright yellow. Purple/blue Ageratum grows profusely among the grasses and weeds and attracts a myriad of visitors like the fuzzy bumble bee. Drinking deeply it buzzes on, trying to get that one last taste of sweetness before it gets too cold. 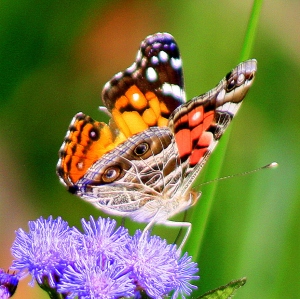 Found among the branches, A Painted Lady Butterfly also gathers nectar as it zips from one bush to the next. Pausing just long enough to give you time to marvel at how well God paints. Her colors are so delicate, your fingers itch to touch, but you resist the urge. 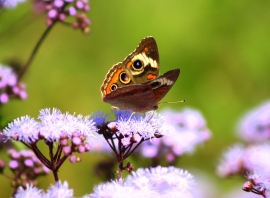 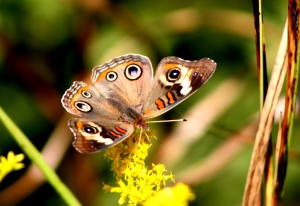 Movement quickly draws the eye to the brilliantly colored Goldenrod. The Common Buckeye Butterfly balances lightly on the tips before flitting to another. Along with a sip of nectar, it picks up pollen on its hair body and ferries it on spotted wings to the next plant. So much for love and sex in flowers. 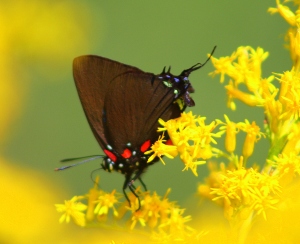 The Great Purple Hairstreak, shares the feast while adding a touch of sophistication to the banquet table. It’s bright red markings and unusual tail are attention -getters for photographers, if you are lucky enough to see them. 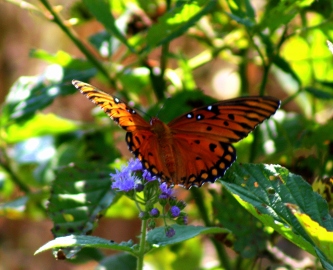 A flash of orange among the purple flowers, heralds the Gulf Fritillary Butterfly. The beautiful back is nothing compared to its underside which bears a multitude of white spots. 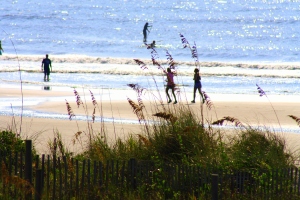 The Last Breath of Summer

The sun still shines on the heated sand as waves wash away foot prints left by morning explorers.

But—there’s a subtle difference. The heat once so intense is now tempered by a cooling breeze.

Everyone rushes to grasp that one last swim or sail. The wind playfully teases the para-sails, bringing joyful exhilaration to die-hard enthusiasts.

Seashells roll in the surf only to be stranded on the wet sand, waiting for the next push or pull of the waves.

As evening nears, everyone pauses to watch the red sun melt into the horizon. Cool air blows across the waves as the last breather of summer dies and autumn is born. 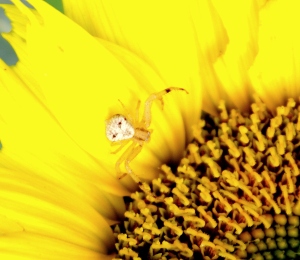 Things That Bug Me

I couldn’t resist this topic after taking the spider picture. I hope you see the face on the abdomen of the little arachnid. These sunflowers were planted by the birds and have provided a wealth of photographs.

By the way, spiders don’t bug me. I’m not afraid of them, or most bugs. Snakes on the other hand are a different story. They scare me to death and cause me to do weird things like hold the page of a book by the very edges, to avoid touching a snake picture. Kind of reminds me of a line from that seventies song, “I don’t like spiders and snakes and that ain’t what it takes to love me.”

Phone calls at supper time, especially telemarketers or bill collectors. Yep, we all have them whether we admit it or not.

People who assume you know certain things and you’re totally in the dark, but too embarrassed to speak up.

All electrical devices that don’t take the same charger, I mean come on, it isn’t rocket science.

Fake smiles. You know the ones with all teeth and no emotion. Practice makes perfect. We all should try to really smile more often.

Going to the cabinet for something sweet and someone left an empty box where your favorite cookies should be. 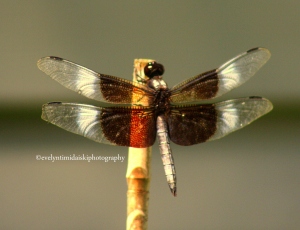 Dragonflies are creatures of mystery and myth. Once thought to have evolved from dragons, these dainty creatures live life to the fullest in the short time they have. Dragonflies spend most of their lives as an immature nymph in the water. When they emerge and become an adult, they only have two months to see the world, find a mate, reproduce and die.

Dragonflies symbolize change or metamorphosis. This change is especially associated with maturity. Powerful and poised dragonflies can see into the depths of water. This is a sort of self-discovery which only comes with maturity.

They have the magical power of iridescence, or change color with the light. Eighty percent of their brain is devoted to sight. They can see three hundred and sixty degrees and fly in every direction. They do all of this with the grace of a ballet dancer dancing on a lily pad. 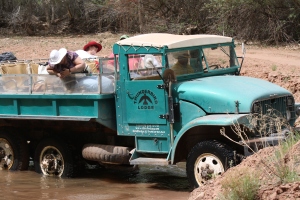 If you believe the old saying, then this picture should say a lot. That’s me hanging over the side, watching as we dig deeper into the mud. I took this trip to Canyon de Chelle last April. It was one of those momentous journeys that is life changing.

END_OF_DOCUMENT_TOKEN_TO_BE_REPLACED

My first real success at writing goes all the way back to high school. I excelled in Advanced Composition and College Prep English, just like many others. No, this happened outside of my English class. My big success happened in American History.  Oh–I need to tell you this occurred in the early seventies. In a traditional rural public school, things were sexist. Roles were gender specific and most jobs were the same way.

Normally, a very quiet young lady (in school at least) I took offence to a boy saying a woman could never become president. The discussion soon became a class topic and heated up dramatically. My wise teacher explained to us that something this important should be voted upon. She called “jerkhead” and myself up and asked if we would run for president of the United States. The young man in question, thought it great fun and we both agreed.

We wrote speeches addressing all the problems of the nation and possible solutions. For those who don’t remember, in the south, this was  the middle of integration.  Schools were becoming tension filled arenas for change.

On the day of the election, our teacher took our speeches and read them to the class. We were not in the room and she told no one whose speech belong to whom.  Drumroll Please!!!! I won. When we were brought back into the class, the teacher announced the results to a stunned class and you- know -who.

For the rest of the year, that young man addressed me as “Madam President” and carried my books to the bus every afternoon.

The seeds of  great ideas come from so many places. Allowing ourselves the freedom to express these ideas and converse with others about them, builds community. As I join the writing community, I look forward to talking with you about so many things…

PS: My first summer job while in college, “jerkface” was my boss. Life is cruel!

After years of teaching Biology, I am now embarking on a new career. Writing is now my creative outlet. My daughter once asked where I came up with all those stories. My answer, “Thoughts just rumble around up there and then something falls out.” She wasn’t pleased with my answer.

I am a widow with two wonderful, well-adjusted grown kids. The apron strings have been cut and now I’m waiting to be a grandmother. Hint-Hint My two dogs, Fancy and Bitsy keep me company and mostly sane.

When I’m not writing, I also enjoy painting watercolors, and photography. You will probably see many of my photos on the posts. As I head down this new path, I look forward to meeting many new and interesting people.

I am a true Southerner, so you will probably pick up on some unfamiliar words. Don’t worry, they are usually very colorful and definitely add flavor to my writing.

Hello and Welcome to my webpage. As we say in the South, “kick your shoes off, and sit awhile.”

A brush of fingers, a sizzling stare and whispered endearments all breathe life into romantic fiction. Join me as we explore my sensuous, tantalizing heroes as they struggle against evil and their inner demons. Strong enough to be gentle; male enough to make you swoon.